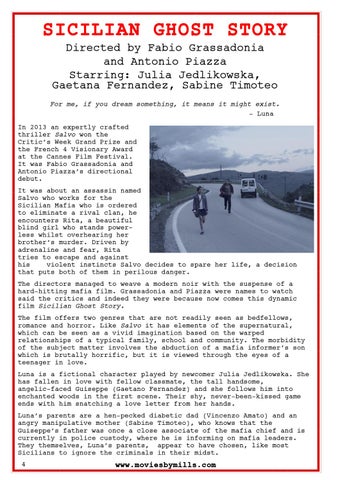 SICILIAN GHOST STORY Directed by Fabio Grassadonia and Antonio Piazza Starring: Julia Jedlikowska, Gaetana Fernandez, Sabine Timoteo For me, if you dream something, it means it might exist. - Luna In 2013 an expertly crafted thriller Salvo won the Critic’s Week Grand Prize and the French 4 Visionary Award at the Cannes Film Festival. It was Fabio Grassadonia and Antonio Piazza’s directional debut. It was about an assassin named Salvo who works for the Sicilian Mafia who is ordered to eliminate a rival clan, he encounters Rita, a beautiful blind girl who stands powerless whilst overhearing her brother’s murder. Driven by adrenaline and fear, Rita tries to escape and against his violent instincts Salvo decides to spare her life, a decision that puts both of them in perilous danger. The directors managed to weave a modern noir with the suspense of a hard-hitting mafia film. Grassadonia and Piazza were names to watch said the critics and indeed they were because now comes this dynamic film Sicilian Ghost Story. The film offers two genres that are not readily seen as bedfellows, romance and horror. Like Salvo it has elements of the supernatural, which can be seen as a vivid imagination based on the warped relationships of a typical family, school and community. The morbidity of the subject matter involves the abduction of a mafia informer’s son which is brutally horrific, but it is viewed through the eyes of a teenager in love. Luna is a fictional character played by newcomer Julia Jedlikowska. She has fallen in love with fellow classmate, the tall handsome, angelic-faced Guiseppe (Gaetano Fernandez) and she follows him into enchanted woods in the first scene. Their shy, never-been-kissed game ends with him snatching a love letter from her hands. Luna’s parents are a hen-pecked diabetic dad (Vincenzo Amato) and an angry manipulative mother (Sabine Timoteo), who knows that the Guiseppe’s father was once a close associate of the mafia chief and is currently in police custody, where he is informing on mafia leaders. They themselves, Luna’s parents, appear to have chosen, like most Sicilians to ignore the criminals in their midst. 4