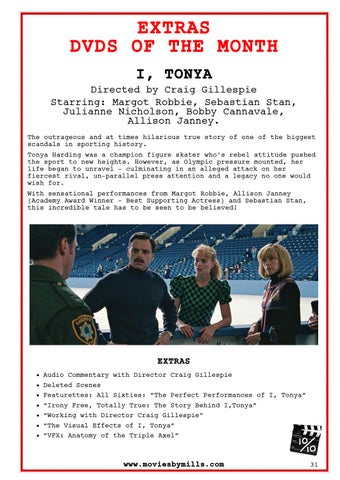 EXTRAS DVDS OF THE MONTH I, TONYA Directed by Craig Gillespie Starring: Margot Robbie, Sebastian Stan, Julianne Nicholson, Bobby Cannavale, Allison Janney. The outrageous and at times hilarious true story of one of the biggest scandals in sporting history. Tonya Harding was a champion figure skater who’s rebel attitude pushed the sport to new heights. However, as Olympic pressure mounted, her life began to unravel – culminating in an alleged attack on her fiercest rival, un-parallel press attention and a legacy no one would wish for. With sensational performances from Margot Robbie, Allison Janney (Academy Award Winner – Best Supporting Actress) and Sebastian Stan, this incredible tale has to be seen to be believed!