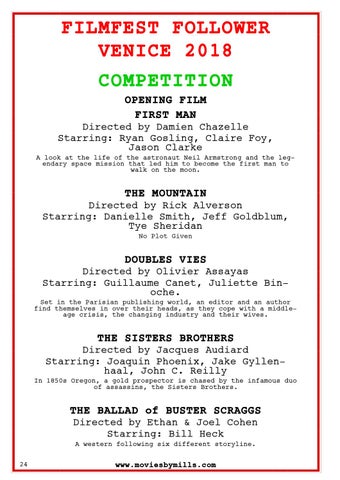 FILMFEST FOLLOWER VENICE 2018 COMPETITION OPENING FILM FIRST MAN Directed by Damien Chazelle Starring: Ryan Gosling, Claire Foy, Jason Clarke A look at the life of the astronaut Neil Armstrong and the legendary space mission that led him to become the first man to walk on the moon.

DOUBLES VIES Directed by Olivier Assayas Starring: Guillaume Canet, Juliette Binoche. Set in the Parisian publishing world, an editor and an author find themselves in over their heads, as they cope with a middleage crisis, the changing industry and their wives.