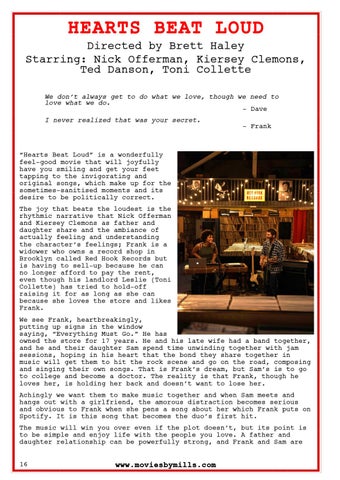 HEARTS BEAT LOUD Directed by Brett Haley Starring: Nick Offerman, Kiersey Clemons, Ted Danson, Toni Collette We don’t always get to do what we love, though we need to love what we do. - Dave I never realized that was your secret. - Frank

“Hearts Beat Loud” is a wonderfully feel-good movie that will joyfully have you smiling and get your feet tapping to the invigorating and original songs, which make up for the sometimes-sanitised moments and its desire to be politically correct. The joy that beats the loudest is the rhythmic narrative that Nick Offerman and Kiersey Clemons as father and daughter share and the ambiance of actually feeling and understanding the character’s feelings; Frank is a widower who owns a record shop in Brooklyn called Red Hook Records but is having to sell-up because he can no longer afford to pay the rent, even though his landlord Leslie (Toni Collette) has tried to hold-off raising it for as long as she can because she loves the store and likes Frank. We see Frank, heartbreakingly, putting up signs in the window saying, “Everything Must Go.” He has owned the store for 17 years. He and his late wife had a band together, and he and their daughter Sam spend time unwinding together with jam sessions, hoping in his heart that the bond they share together in music will get them to hit the rock scene and go on the road, composing and singing their own songs. That is Frank’s dream, but Sam’s is to go to college and become a doctor. The reality is that Frank, though he loves her, is holding her back and doesn’t want to lose her. Achingly we want them to make music together and when Sam meets and hangs out with a girlfriend, the amorous distraction becomes serious and obvious to Frank when she pens a song about her which Frank puts on Spotify. It is this song that becomes the duo’s first hit. The music will win you over even if the plot doesn’t, but its point is to be simple and enjoy life with the people you love. A father and daughter relationship can be powerfully strong, and Frank and Sam are 16