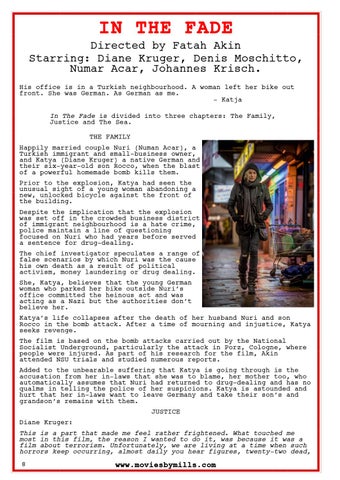 IN THE FADE Directed by Fatah Akin Starring: Diane Kruger, Denis Moschitto, Numar Acar, Johannes Krisch. His office is in a Turkish neighbourhood. A woman left her bike out front. She was German. As German as me. - Katja In The Fade is divided into three chapters: The Family, Justice and The Sea. THE FAMILY Happily married couple Nuri (Numan Acar), a Turkish immigrant and small-business owner, and Katya (Diane Kruger) a native German and their six-year-old son Rocco, when the blast of a powerful homemade bomb kills them. Prior to the explosion, Katya had seen the unusual sight of a young woman abandoning a new, unlocked bicycle against the front of the building. Despite the implication that the explosion was set off in the crowded business district of immigrant neighbourhood is a hate crime, police maintain a line of questioning focused on Nuri who had years before served a sentence for drug-dealing. The chief investigator speculates a range of false scenarios by which Nuri was the cause his own death as a result of political activism, money laundering or drug dealing. She, Katya, believes woman who parked her office committed the acting as a Nazi but believe her.

Katya’s life collapses after the death of her husband Nuri and son Rocco in the bomb attack. After a time of mourning and injustice, Katya seeks revenge.

The film is based on the bomb attacks carried out by the National Socialist Underground, particularly the attack in Porz, Cologne, where people were injured. As part of his research for the film, Akin attended NSU trials and studied numerous reports. Added to the unbearable suffering that Katya is going through is the accusation from her in-laws that she was to blame, her mother too, who automatically assumes that Nuri had returned to drug-dealing and has no qualms in telling the police of her suspicions. Katya is astounded and hurt that her in-laws want to leave Germany and take their son’s and grandson’s remains with them. JUSTICE Diane Kruger: This is a part that made me feel rather frightened. What touched me most in this film, the reason I wanted to do it, was because it was a film about terrorism. Unfortunately, we are living at a time when such horrors keep occurring, almost daily you hear figures, twenty-two dead, 8