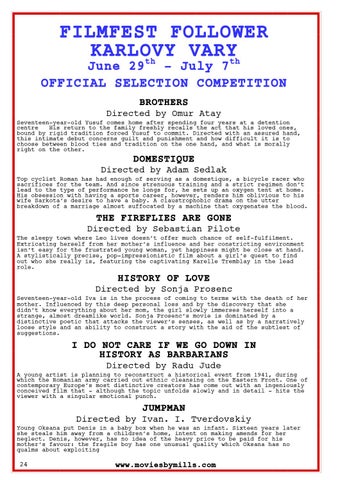 June 29 – July 7 OFFICIAL SELECTION COMPETITION BROTHERS Directed by Omur Atay Seventeen-year-old Yusuf comes home after spending four years at a detention centre His return to the family freshly recalls the act that his loved ones, bound by rigid tradition forced Yusuf to commit. Directed with an assured hand, this intimate debut concerns guilt and punishment and how difficult it is to choose between blood ties and tradition on the one hand, and what is morally right on the other.

DOMESTIQUE Directed by Adam Sedlak Top cyclist Roman has had enough of serving as a domestique, a bicycle racer who sacrifices for the team. And since strenuous training and a strict regimen don’t lead to the type of performance he longs for, he sets up an oxygen tent at home. His obsession with having a sports career, however, renders him oblivious to his wife Sarkota’s desire to have a baby. A claustrophobic drama on the utter breakdown of a marriage almost suffocated by a machine that oxygenates the blood.

THE FIREFLIES ARE GONE Directed by Sebastian Pilote The sleepy town where Leo lives doesn’t offer much chance of self-fulfilment. Extricating herself from her mother’s influence and her constricting environment isn’t easy for the frustrated young woman, yet happiness might be close at hand. A stylistically precise, pop-impressionistic film about a girl’s quest to find out who she really is, featuring the captivating Karelle Tremblay in the lead role.

HISTORY OF LOVE Directed by Sonja Prosenc Seventeen-year-old Iva is in the process of coming to terms with the death of her mother. Influenced by this deep personal loss and by the discovery that she didn’t know everything about her mom, the girl slowly immerses herself into a strange, almost dreamlike world. Sonja Prosenc’s movie is dominated by a distinctive poetic that attacks the viewer’s senses, as well as by a narratively loose style and an ability to construct a story with the aid of the subtlest of suggestions.

I DO NOT CARE IF WE GO DOWN IN HISTORY AS BARBARIANS Directed by Radu Jude A young artist is planning to reconstruct a historical event from 1941, during which the Romanian army carried out ethnic cleansing on the Eastern Front. One of contemporary Europe’s most distinctive creators has come out with an ingeniously conceived film that – although the topic unfolds slowly and in detail – hits the viewer with a singular emotional punch.

JUMPMAN Directed by Ivan. I. Tverdovskiy Young Oksana put Denis in a baby box when he was an infant. Sixteen years later she steals him away from a children’s home, intent on making amends for her neglect. Denis, however, has no idea of the heavy price to be paid for his mother’s favour: the fragile boy has one unusual quality which Oksana has no qualms about exploiting