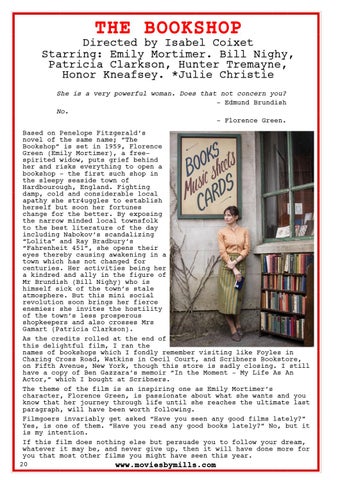 THE BOOKSHOP Directed by Isabel Coixet Starring: Emily Mortimer. Bill Nighy, Patricia Clarkson, Hunter Tremayne, Honor Kneafsey. *Julie Christie She is a very powerful woman. Does that not concern you? - Edmund Brundish No. - Florence Green. Based on Penelope Fitzgerald’s novel of the same name; “The Bookshop” is set in 1959, Florence Green (Emily Mortimer), a freespirited widow, puts grief behind her and risks everything to open a bookshop – the first such shop in the sleepy seaside town of Hardbourough, England. Fighting damp, cold and considerable local apathy she str4uggles to establish herself but soon her fortunes change for the better. By exposing the narrow minded local townsfolk to the best literature of the day including Nabokov’s scandalizing “Lolita” and Ray Bradbury’s “Fahrenheit 451”, she opens their eyes thereby causing awakening in a town which has not changed for centuries. Her activities being her a kindred and ally in the figure of Mr Brundish (Bill Nighy) who is himself sick of the town’s stale atmosphere. But this mini social revolution soon brings her fierce enemies: she invites the hostility of the town’s less prosperous shopkeepers and also crosses Mrs Gamart (Patricia Clarkson). As the credits rolled at the end of this delightful film, I ran the names of bookshops which I fondly remember visiting like Foyles in Charing Cross Road, Watkins in Cecil Court, and Scribners Bookstore, on Fifth Avenue, New York, though this store is sadly closing. I still have a copy of Ben Gazzara’s memoir “In the Moment - My Life As An Actor,” which I bought at Scribners. The theme of the film is an inspiring one as Emily Mortimer’s character, Florence Green, is passionate about what she wants and you know that her journey through life until she reaches the ultimate last paragraph, will have been worth following. Filmgoers invariably get asked “Have you seen any good films lately?” Yes, is one of them. “Have you read any good books lately?” No, but it is my intention. If this film does nothing else but persuade you to follow your dream, whatever it may be, and never give up, then it will have done more for you that most other films you might have seen this year. 20 www.moviesbymills.com