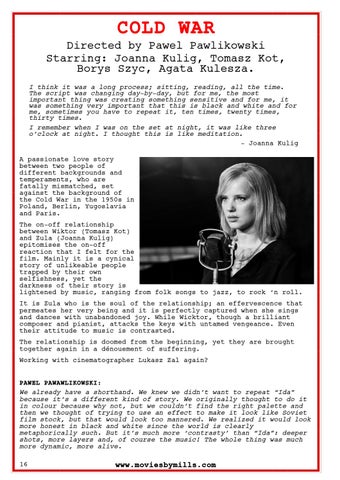 COLD WAR Directed by Pawel Pawlikowski Starring: Joanna Kulig, Tomasz Kot, Borys Szyc, Agata Kulesza. I think it was a long process; sitting, reading, all the time. The script was changing day-by-day, but for me, the most important thing was creating something sensitive and for me, it was something very important that this is black and white and for me, sometimes you have to repeat it, ten times, twenty times, thirty times. I remember when I was on the set at night, it was like three o’clock at night. I thought this is like meditation. - Joanna Kulig A passionate love story between two people of different backgrounds and temperaments, who are fatally mismatched, set against the background of the Cold War in the 1950s in Poland, Berlin, Yugoslavia and Paris. The on-off relationship between Wiktor (Tomasz Kot) and Zula (Joanna Kulig) epitomises the on-off reaction that I felt for the film. Mainly it is a cynical story of unlikeable people trapped by their own selfishness, yet the darkness of their story is lightened by music, ranging from folk songs to jazz, to rock ‘n roll. It is Zula who is the soul of the relationship; an effervescence that permeates her very being and it is perfectly captured when she sings and dances with unabandoned joy. While Wicktor, though a brilliant composer and pianist, attacks the keys with untamed vengeance. Even their attitude to music is contrasted.

The relationship is doomed from the beginning, yet they are brought together again in a dénouement of suffering. Working with cinematographer Lukasz Zal again? PAWEL PAWAWLIKOWSKI: We already have a shorthand. We knew we didn’t want to repeat “Ida” because it’s a different kind of story. We originally thought to do it in colour because why not, but we couldn’t find the right palette and then we thought of trying to use an effect to make it look like Soviet film stock, but that would look too mannered. We realized it would look more honest in black and white since the world is clearly metaphorically such. But it’s much more ‘contrasty’ than “Ida”: deeper shots, more layers and, of course the music! The whole thing was much more dynamic, more alive. 16