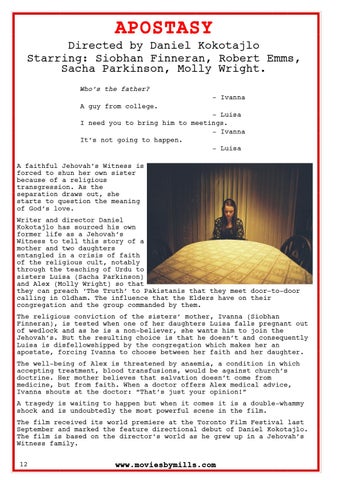 APOSTASY Directed by Daniel Kokotajlo Starring: Siobhan Finneran, Robert Emms, Sacha Parkinson, Molly Wright. Who’s the father? - Ivanna A guy from college. - Luisa I need you to bring him to meetings. - Ivanna It’s not going to happen. - Luisa A faithful Jehovah’s Witness is forced to shun her own sister because of a religious transgression. As the separation draws out, she starts to question the meaning of God’s love. Writer and director Daniel Kokotajlo has sourced his own former life as a Jehovah’s Witness to tell this story of a mother and two daughters entangled in a crisis of faith of the religious cult, notably through the teaching of Urdu to sisters Luisa (Sacha Parkinson) and Alex (Molly Wright) so that they can preach ‘The Truth’ to Pakistanis that they meet door-to-door calling in Oldham. The influence that the Elders have on their congregation and the group commanded by them. The religious conviction of the sisters’ mother, Ivanna (Siobhan Finneran), is tested when one of her daughters Luisa falls pregnant out of wedlock and as he is a non-believer, she wants him to join the Jehovah’s. But the resulting choice is that he doesn’t and consequently Luisa is disfellowshipped by the congregation which makes her an apostate, forcing Ivanna to choose between her faith and her daughter. The well-being of Alex is threatened by anaemia, a condition in which accepting treatment, blood transfusions, would be against church’s doctrine. Her mother believes that salvation doesn’t come from medicine, but from faith. When a doctor offers Alex medical advice, Ivanna shouts at the doctor: “That’s just your opinion!” A tragedy is waiting to happen but when it comes it is a double-whammy shock and is undoubtedly the most powerful scene in the film. The film received its world premiere at the Toronto Film Festival last September and marked the feature directional debut of Daniel Kokotajlo. The film is based on the director’s world as he grew up in a Jehovah’s Witness family. 12