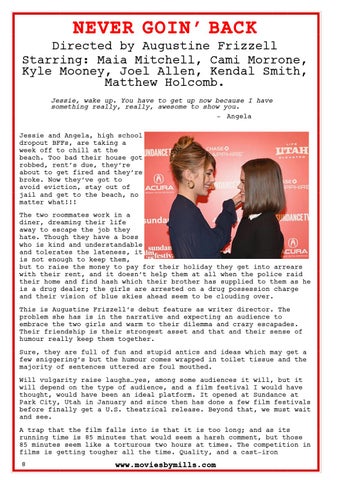 NEVER GOIN’ BACK Directed by Augustine Frizzell Starring: Maia Mitchell, Cami Morrone, Kyle Mooney, Joel Allen, Kendal Smith, Matthew Holcomb. Jessie, wake up. You have to get up now because I have something really, really, awesome to show you. - Angela Jessie and Angela, high school dropout BFFs, are taking a week off to chill at the beach. Too bad their house got robbed, rent’s due, they’re about to get fired and they’re broke. Now they’ve got to avoid eviction, stay out of jail and get to the beach, no matter what!!! The two roommates work in a diner, dreaming their life away to escape the job they hate. Though they have a boss who is kind and understandable and tolerates the lateness, it is not enough to keep them, but to raise the money to pay for their holiday they get into arrears with their rent, and it doesn’t help them at all when the police raid their home and find hash which their brother has supplied to them as he is a drug dealer; the girls are arrested on a drug possession charge and their vision of blue skies ahead seem to be clouding over. This is Augustine Frizzell’s debut feature as writer director. The problem she has is in the narrative and expecting an audience to embrace the two girls and warm to their dilemma and crazy escapades. Their friendship is their strongest asset and that and their sense of humour really keep them together. Sure, they are full of fun and stupid antics and ideas which may get a few sniggering’s but the humour comes wrapped in toilet tissue and the majority of sentences uttered are foul mouthed. Will vulgarity raise laughs…yes, among some audiences it will, but it will depend on the type of audience, and a film festival I would have thought, would have been an ideal platform. It opened at Sundance at Park City, Utah in January and since then has done a few film festivals before finally get a U.S. theatrical release. Beyond that, we must wait and see. A trap that the film falls into is that it is too long; and as its running time is 85 minutes that would seem a harsh comment, but those 85 minutes seem like a torturous two hours at times. The competition in films is getting tougher all the time. Quality, and a cast-iron 8