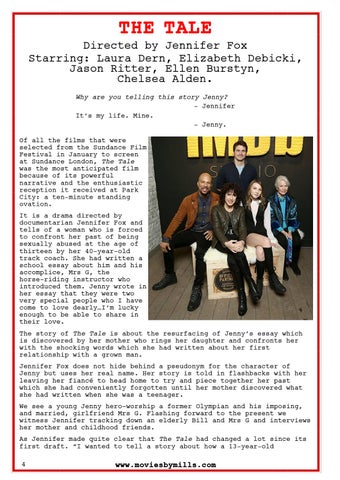 Of all the films that were selected from the Sundance Film Festival in January to screen at Sundance London, The Tale was the most anticipated film because of its powerful narrative and the enthusiastic reception it received at Park City: a ten-minute standing ovation. It is a drama directed by documentarian Jennifer Fox and tells of a woman who is forced to confront her past of being sexually abused at the age of thirteen by her 40-year-old track coach. She had written a school essay about him and his accomplice, Mrs G, the horse-riding instructor who introduced them. Jenny wrote in her essay that they were two very special people who I have come to love dearly…I’m lucky enough to be able to share in their love. The story of The Tale is about the resurfacing of Jenny’s essay which is discovered by her mother who rings her daughter and confronts her with the shocking words which she had written about her first relationship with a grown man. Jennifer Fox does not hide behind a pseudonym for the character of Jenny but uses her real name. Her story is told in flashbacks with her leaving her fiancé to head home to try and piece together her past which she had conveniently forgotten until her mother discovered what she had written when she was a teenager. We see a young Jenny hero-worship a former Olympian and his imposing, and married, girlfriend Mrs G. Flashing forward to the present we witness Jennifer tracking down an elderly Bill and Mrs G and interviews her mother and childhood friends.

As Jennifer made quite clear that The Tale had changed a lot since its first draft. “I wanted to tell a story about how a 13-year-old 4