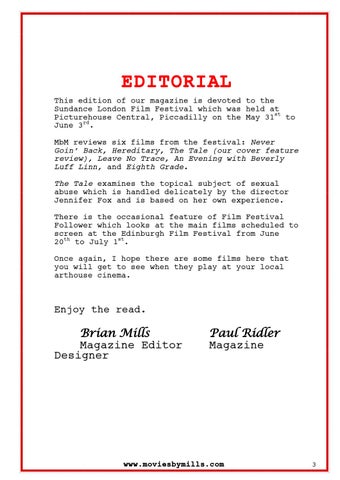 EDITORIAL This edition of our magazine is devoted to the Sundance London Film Festival which was held at Picturehouse Central, Piccadilly on the May 31st to June 3rd.

MbM reviews six films from the festival: Never Goinâ&#x20AC;&#x2122; Back, Hereditary, The Tale (our cover feature review), Leave No Trace, An Evening with Beverly Luff Linn, and Eighth Grade. The Tale examines the topical subject of sexual abuse which is handled delicately by the director Jennifer Fox and is based on her own experience. There is the occasional feature of Film Festival Follower which looks at the main films scheduled to screen at the Edinburgh Film Festival from June 20th to July 1st. Once again, I hope there are some films here that you will get to see when they play at your local arthouse cinema.