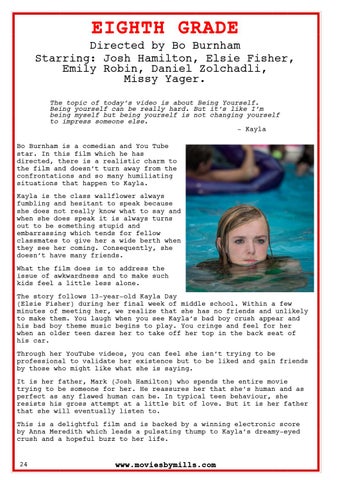 EIGHTH GRADE Directed by Bo Burnham Starring: Josh Hamilton, Elsie Fisher, Emily Robin, Daniel Zolchadli, Missy Yager. The topic of today’s video is about Being Yourself. Being yourself can be really hard. But it’s like I’m being myself but being yourself is not changing yourself to impress someone else. - Kayla Bo Burnham is a comedian and You Tube star. In this film which he has directed, there is a realistic charm to the film and doesn’t turn away from the confrontations and so many humiliating situations that happen to Kayla. Kayla is the class wallflower always fumbling and hesitant to speak because she does not really know what to say and when she does speak it is always turns out to be something stupid and embarrassing which tends for fellow classmates to give her a wide berth when they see her coming. Consequently, she doesn’t have many friends. What the film does is to address the issue of awkwardness and to make such kids feel a little less alone. The story follows 13-year-old Kayla Day (Elsie Fisher) during her final week of middle school. Within a few minutes of meeting her, we realize that she has no friends and unlikely to make them. You laugh when you see Kayla’s bad boy crush appear and his bad boy theme music begins to play. You cringe and feel for her when an older teen dares her to take off her top in the back seat of his car. Through her YouTube videos, you can feel she isn’t trying to be professional to validate her existence but to be liked and gain friends by those who might like what she is saying. It is her father, Mark (Josh Hamilton) who spends the entire movie trying to be someone for her. He reassures her that she’s human and as perfect as any flawed human can be. In typical teen behaviour, she resists his gross attempt at a little bit of love. But it is her father that she will eventually listen to. This is a delightful film and is backed by a winning electronic score by Anna Meredith which leads a pulsating thump to Kayla’s dreamy-eyed crush and a hopeful buzz to her life.