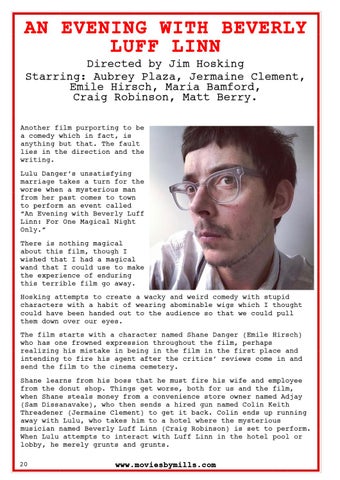 AN EVENING WITH BEVERLY LUFF LINN Directed by Jim Hosking Starring: Aubrey Plaza, Jermaine Clement, Emile Hirsch, Maria Bamford, Craig Robinson, Matt Berry. Another film purporting to be a comedy which in fact, is anything but that. The fault lies in the direction and the writing. Lulu Danger’s unsatisfying marriage takes a turn for the worse when a mysterious man from her past comes to town to perform an event called “An Evening with Beverly Luff Linn: For One Magical Night Only.” There is nothing magical about this film, though I wished that I had a magical wand that I could use to make the experience of enduring this terrible film go away. Hosking attempts to create a wacky and weird comedy with stupid characters with a habit of wearing abominable wigs which I thought could have been handed out to the audience so that we could pull them down over our eyes. The film starts with a character named Shane Danger (Emile Hirsch) who has one frowned expression throughout the film, perhaps realizing his mistake in being in the film in the first place and intending to fire his agent after the critics’ reviews come in and send the film to the cinema cemetery. Shane learns from his boss that he must fire his wife and employee from the donut shop. Things get worse, both for us and the film, when Shane steals money from a convenience store owner named Adjay (Sam Dissanavake), who then sends a hired gun named Colin Keith Threadener (Jermaine Clement) to get it back. Colin ends up running away with Lulu, who takes him to a hotel where the mysterious musician named Beverly Luff Linn (Craig Robinson) is set to perform. When Lulu attempts to interact with Luff Linn in the hotel pool or lobby, he merely grunts and grunts. 20