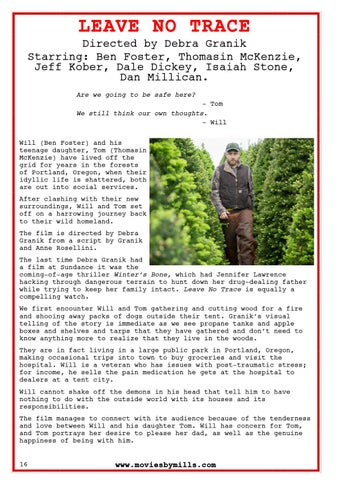 Will (Ben Foster) and his teenage daughter, Tom (Thomasin McKenzie) have lived off the grid for years in the forests of Portland, Oregon, when their idyllic life is shattered, both are out into social services. After clashing with their new surroundings, Will and Tom set off on a harrowing journey back to their wild homeland. The film is directed by Debra Granik from a script by Granik and Anne Rosellini. The last time Debra Granik had a film at Sundance it was the coming-of-age thriller Winter’s Bone, which had Jennifer Lawrence hacking through dangerous terrain to hunt down her drug-dealing father while trying to keep her family intact. Leave No Trace is equally a compelling watch. We first encounter Will and Tom gathering and cutting wood for a fire and shooing away packs of dogs outside their tent. Granik’s visual telling of the story is immediate as we see propane tanks and apple boxes and shelves and tarps that they have gathered and don’t need to know anything more to realize that they live in the woods. They are in fact living in a large public park in Portland, Oregon, making occasional trips into town to buy groceries and visit the hospital. Will is a veteran who has issues with post-traumatic stress; for income, he sells the pain medication he gets at the hospital to dealers at a tent city. Will cannot shake off the demons in his head that tell him to have nothing to do with the outside world with its houses and its responsibilities. The film manages to connect with its audience because of the tenderness and love between Will and his daughter Tom. Will has concern for Tom, and Tom portrays her desire to please her dad, as well as the genuine happiness of being with him.