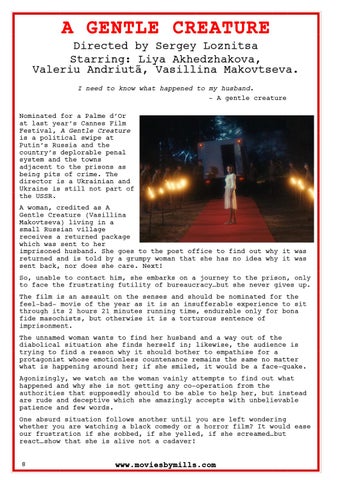 A GENTLE CREATURE Directed by Sergey Loznitsa Starring: Liya Akhedzhakova, Valeriu Andriutã, Vasillina Makovtseva. I need to know what happened to my husband. - A gentle creature Nominated for a Palme d’Or at last year’s Cannes Film Festival, A Gentle Creature is a political swipe at Putin’s Russia and the country’s deplorable penal system and the towns adjacent to the prisons as being pits of crime. The director is a Ukrainian and Ukraine is still not part of the USSR. A woman, credited as A Gentle Creature (Vasillina Makovtseva) living in a small Russian village receives a returned package which was sent to her imprisoned husband. She goes to the post office to find out why it was returned and is told by a grumpy woman that she has no idea why it was sent back, nor does she care. Next! So, unable to contact him, she embarks on a journey to the prison, only to face the frustrating futility of bureaucracy…but she never gives up. The film is an assault on the senses and should be nominated for the feel-bad- movie of the year as it is an insufferable experience to sit through its 2 hours 21 minutes running time, endurable only for bona fide masochists, but otherwise it is a torturous sentence of imprisonment.

The unnamed woman wants to find her husband and a way out of the diabolical situation she finds herself in; likewise, the audience is trying to find a reason why it should bother to empathise for a protagonist whose emotionless countenance remains the same no matter what is happening around her; if she smiled, it would be a face-quake. Agonizingly, we watch as the woman vainly attempts to find out what happened and why she is not getting any co-operation from the authorities that supposedly should to be able to help her, but instead are rude and deceptive which she amazingly accepts with unbelievable patience and few words. One absurd situation follows another until you are left wondering whether you are watching a black comedy or a horror film? It would ease our frustration if she sobbed, if she yelled, if she screamed…but react…show that she is alive not a cadaver! 8