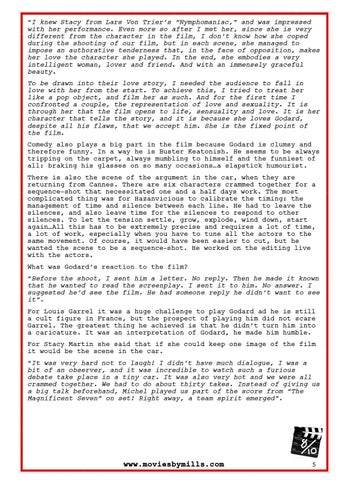 “I knew Stacy from Lars Von Trier’s “Nymphomaniac,” and was impressed with her performance. Even more so after I met her, since she is very different from the character in the film, I don’t know how she coped during the shooting of our film, but in each scene, she managed to impose an authorative tenderness that, in the face of opposition, makes her love the character she played. In the end, she embodies a very intelligent woman, lover and friend. And with an immensely graceful beauty. To be drawn into their love story, I needed the audience to fall in love with her from the start. To achieve this, I tried to treat her like a pop object, and film her as such. And for the first time I confronted a couple, the representation of love and sexuality. It is through her that the film opens to life, sensuality and love. It is her character that tells the story, and it is because she loves Godard, despite all his flaws, that we accept him. She is the fixed point of the film. Comedy also plays a big part in the film because Godard is clumsy and therefore funny. In a way he is Buster Keatonish. He seems to be always tripping on the carpet, always mumbling to himself and the funniest of all: braking his glasses on so many occasions…a slapstick humourist. There is also the scene of the argument in the car, when they are returning from Cannes. There are six characters crammed together for a sequence-shot that necessitated one and a half days work. The most complicated thing was for Hazanvicious to calibrate the timing: the management of time and silence between each line. He had to leave the silences, and also leave time for the silences to respond to other silences. To let the tension settle, grow, explode, wind down, start again…All this has to be extremely precise and requires a lot of time, a lot of work, especially when you have to tune all the actors to the same movement. Of course, it would have been easier to cut, but he wanted the scene to be a sequence-shot. He worked on the editing live with the actors. What was Godard’s reaction to the film? “Before the shoot, I sent him a letter. No reply. Then he made it known that he wanted to read the screenplay. I sent it to him. No answer. I suggested he’d see the film. He had someone reply he didn’t want to see it”. For Louis Garrel it was a huge challenge to play Godard ad he is still a cult figure in France, but the prospect of playing him did not scare Garrel. The greatest thing he achieved is that he didn’t turn him into a caricature. It was an interpretation of Godard, he made him humble. For Stacy Martin she said that if she could keep one image of the film it would be the scene in the car. “It was very hard not to laugh! I didn’t have much dialogue, I was a bit of an observer, and it was incredible to watch such a furious debate take place in a tiny car. It was also very hot and we were all crammed together. We had to do about thirty takes. Instead of giving us a big talk beforehand, Michel played us part of the score from “The Magnificent Seven” on set! Right away, a team spirit emerged”.