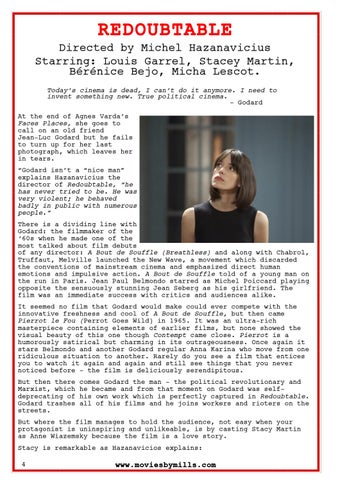 REDOUBTABLE Directed by Michel Hazanavicius Starring: Louis Garrel, Stacey Martin, Bérénice Bejo, Micha Lescot. Today’s cinema is dead, I can’t do it anymore. I need to invent something new. True political cinema. - Godard At the end of Agnes Varda’s Faces Places, she goes to call on an old friend Jean-Luc Godard but he fails to turn up for her last photograph, which leaves her in tears. “Godard isn’t a “nice man” explains Hazanavicius the director of Redoubtable, “he has never tried to be. He was very violent; he behaved badly in public with numerous people.” There is a dividing line with Godard: the filmmaker of the ‘60s when he made one of the most talked about film debuts of any director: A Bout de Souffle (Breathless) and along with Chabrol, Truffaut, Melville launched the New Wave, a movement which discarded the conventions of mainstream cinema and emphasized direct human emotions and impulsive action. A Bout de Souffle told of a young man on the run in Paris. Jean Paul Belmondo starred as Michel Poiccard playing opposite the sensuously stunning Jean Seberg as his girlfriend. The film was an immediate success with critics and audiences alike. It seemed no film that Godard would make could ever compete with the innovative freshness and cool of A Bout de Souffle, but then came Pierrot le Fou (Perrot Goes Wild) in 1965. It was an ultra-rich masterpiece containing elements of earlier films, but none showed the visual beauty of this one though Contempt came close. Pierrot is a humorously satirical but charming in its outrageousness. Once again it stars Belmondo and another Godard regular Anna Karina who move from one ridiculous situation to another. Rarely do you see a film that entices you to watch it again and again and still see things that you never noticed before – the film is deliciously serendipitous. But then there Marxist, which deprecating of Godard trashes streets.

comes Godard the man – the political revolutionary and he became and from that moment on Godard was selfhis own work which is perfectly captured in Redoubtable. all of his films and he joins workers and rioters on the

But where the film manages to hold the audience, not easy when your protagonist is uninspiring and unlikeable, is by casting Stacy Martin as Anne Wiazemsky because the film is a love story. Stacy is remarkable as Hazanavicios explains: 4