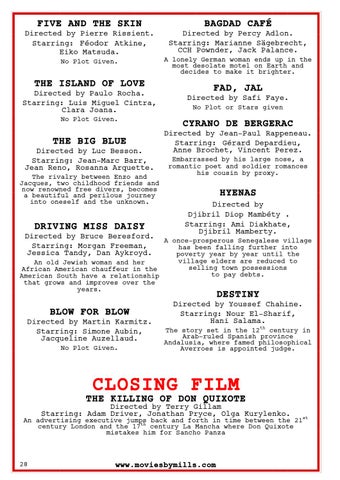 FIVE AND THE SKIN

A lonely German woman ends up in the most desolate motel on Earth and decides to make it brighter.

THE BIG BLUE Directed by Luc Besson. Starring: Jean-Marc Barr, Jean Reno, Rosanna Arquette. The rivalry between Enzo and Jacques, two childhood friends and now renowned free divers, becomes a beautiful and perilous journey into oneself and the unknown.

FAD, JAL Directed by Safi Faye. No Plot or Stars given

A once-prosperous Senegalese village has been falling further into poverty year by year until the village elders are reduced to An old Jewish woman and her selling town possessions African American chauffeur in the to pay debts. American South have a relationship that grows and improves over the years.

THE KILLING OF DON QUIXOTE