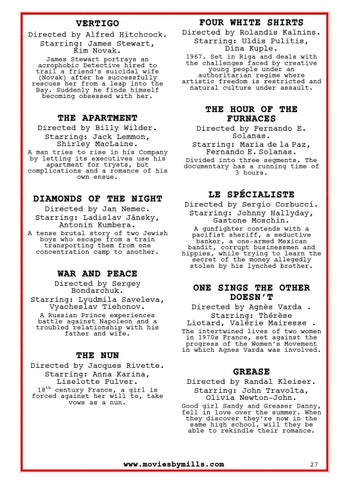 James Stewart portrays an acrophobic Detective hired to trail a friend’s suicidal wife (Novak) after he successfully rescues her from a leap into the Bay. Suddenly he finds himself becoming obsessed with her.

THE APARTMENT Directed by Billy Wilder. Starring: Jack Lemmon, Shirley MacLaine. A man tries to rise in his Company by letting its executives use his apartment for trysts, but complications and a romance of his own ensue.

DIAMONDS OF THE NIGHT Directed by Jan Nemec. Starring: Ladislav Jánsky, Antonin Kumbera. A tense brutal story of two Jewish boys who escape from a train transporting them from one concentration camp to another.

1967. Set in Riga and deals with the challenges faced by creative young people under an authoritarian regime where artistic freedom is restricted and natural culture under assault.

LE SPÉCIALISTE Directed by Sergio Corbucci. Starring: Johnny Hallyday, Gastone Moschin. A gunfighter contends with a pacifist sheriff, a seductive banker, a one-armed Mexican bandit, corrupt businessmen and hippies, while trying to learn the secret of the money allegedly stolen by his lynched brother.

WAR AND PEACE Directed by Sergey Bondarchuk. Starring: Lyudmila Saveleva, Vyacheslav Tiehonov. A Russian Prince experiences battle against Napoleon and a troubled relationship with his father and wife.

THE NUN Directed by Jacques Rivette. Starring: Anna Karina, Liselotte Pulver. 18th century France, a girl is forced against her will to, take vows as a nun.

ONE SINGS THE OTHER DOESN’T Directed by Agnès Varda . Starring: Thérèse Liotard, Valérie Mairesse . The intertwined lives of two women in 1970s France, set against the progress of the Women’s Movement in which Agnes Varda was involved.

GREASE Directed by Randal Kleiser. Starring: John Travolta, Olivia Newton-John. Good girl Sandy and Greaser Danny, fell in love over the summer. When they discover they’re now in the same high school, will they be able to rekindle their romance.