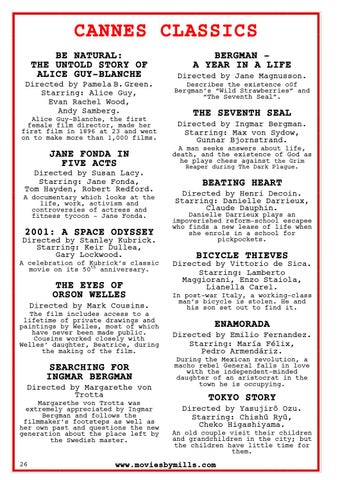 CANNES CLASSICS BE NATURAL: THE UNTOLD STORY OF ALICE GUY-BLANCHE Directed by Pamela B. Green. Starring: Alice Guy, Evan Rachel Wood, Andy Samberg. Alice Guy-Blanche, the first female film director, made her first film in 1896 at 23 and went on to make more than 1,000 films.

THE EYES OF ORSON WELLES Directed by Mark Cousins. The film includes access to a lifetime of private drawings and paintings by Welles, most of which have never been made public. Cousins worked closely with Welles’ daughter, Beatrice, during the making of the film.

BERGMAN – A YEAR IN A LIFE Directed by Jane Magnusson. Describes the existence o0f Bergman’s “Wild Strawberries” and “The Seventh Seal”.

THE SEVENTH SEAL Directed by Ingmar Bergman. Starring: Max von Sydow, Gunnar Bjornstrand. A man seeks answers about life, death, and the existence of God as he plays chess against the Grim Reaper during The Dark Plague.

BEATING HEART Directed by Henri Decoin. Starring: Danielle Darrieux, Claude Dauphin. Danielle Darrieux plays an impoverished reform-school escapee who finds a new lease of life when she enrols in a school for pickpockets.

BICYCLE THIEVES Directed by Vittorio de Sica. Starring: Lamberto Maggiorani, Enzo Staiola, Lianella Carel. In post-war Italy, a working-class man’s bicycle is stolen. He and his son set out to find it.

ENAMORADA Directed by Emilio Fernandez. Starring: María Félix, Pedro Armendáriz. During the Mexican revolution, a macho rebel General falls in love with the independent-minded daughter of an aristocrat in the town he is occupying.

TOKYO STORY Directed by Yasujirô Ozu. Starring: Chishû Ryû, Cheko Higashiyama. An old couple visit their children and grandchildren in the city; but the children have little time for them.