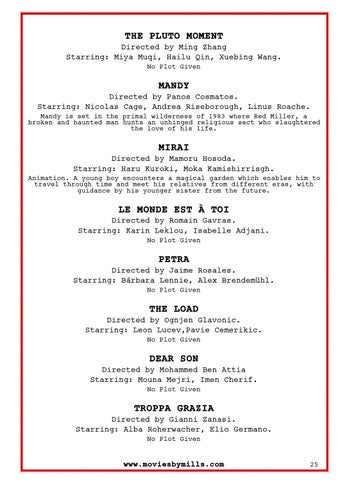 MANDY Directed by Panos Cosmatos. Starring: Nicolas Cage, Andrea Riseborough, Linus Roache. Mandy is set in the primal wilderness of 1983 where Red Miller, a broken and haunted man hunts an unhinged religious sect who slaughtered the love of his life.

MIRAI Directed by Mamoru Hosoda. Starring: Haru Kuroki, Moka Kamishirrisgh. Animation. A young boy encounters a magical garden which enables him to travel through time and meet his relatives from different eras, with guidance by his younger sister from the future.