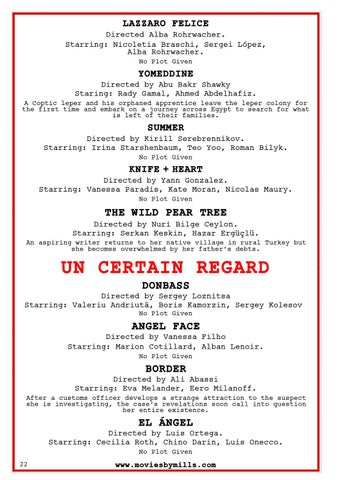 YOMEDDINE Directed by Abu Bakr Shawky Staring: Rady Gamal, Ahmed Abdelhafiz. A Coptic leper and his orphaned apprentice leave the leper colony for the first time and embark on a journey across Egypt to search for what is left of their families.

THE WILD PEAR TREE Directed by Nuri Bilge Ceylon. Starring: Serkan Keskin, Hazar Ergüçlü. An aspiring writer returns to her native village in rural Turkey but she becomes overwhelmed by her father’s debts.

BORDER Directed by Ali Abassi Starring: Eva Melander, Eero Milanoff. After a customs officer develops a strange attraction to the suspect she is investigating, the case’s revelations soon call into question her entire existence.