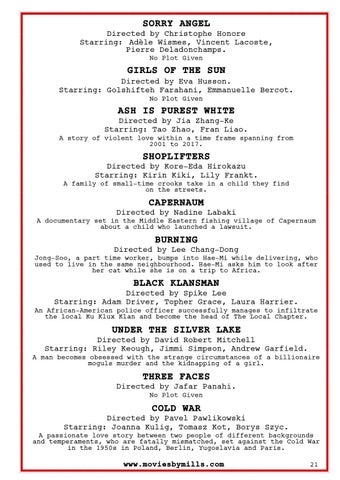 GIRLS OF THE SUN Directed by Eva Husson. Starring: Golshifteh Farahani, Emmanuelle Bercot. No Plot Given

ASH IS PUREST WHITE Directed by Jia Zhang-Ke Starring: Tao Zhao, Fran Liao. A story of violent love within a time frame spanning from 2001 to 2017.

SHOPLIFTERS Directed by Kore-Eda Hirokazu Starring: Kirin Kiki, Lily Frankt. A family of small-time crooks take in a child they find on the streets.

CAPERNAUM Directed by Nadine Labaki A documentary set in the Middle Eastern fishing village of Capernaum about a child who launched a lawsuit.

BURNING Directed by Lee Chang-Dong Jong-Soo, a part time worker, bumps into Hae-Mi while delivering, who used to live in the same neighbourhood. Hae-Mi asks him to look after her cat while she is on a trip to Africa.

UNDER THE SILVER LAKE Directed by David Robert Mitchell Starring: Riley Keough, Jimmi Simpson, Andrew Garfield. A man becomes obsessed with the strange circumstances of a billionaire moguls murder and the kidnapping of a girl.

THREE FACES Directed by Jafar Panahi. No Plot Given

COLD WAR Directed by Pavel Pawlikowski Starring: Joanna Kulig, Tomasz Kot, Borys Szyc. A passionate love story between two people of different backgrounds and temperaments, who are fatally mismatched, set against the Cold War in the 1950s in Poland, Berlin, Yugoslavia and Paris.