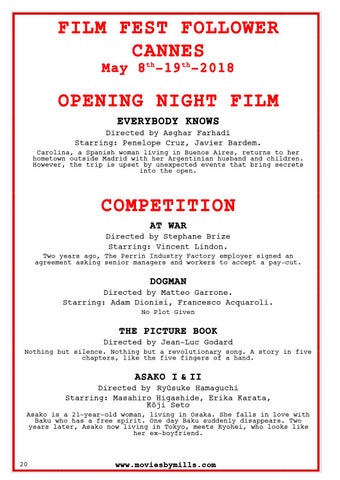 OPENING NIGHT FILM EVERYBODY KNOWS Directed by Asghar Farhadi Starring: Penelope Cruz, Javier Bardem. Carolina, a Spanish woman living in Buenos Aires, returns to her hometown outside Madrid with her Argentinian husband and children. However, the trip is upset by unexpected events that bring secrets into the open.

THE PICTURE BOOK Directed by Jean-Luc Godard Nothing but silence. Nothing but a revolutionary song. A story in five chapters, like the five fingers of a hand.

ASAKO I & II Directed by Ryûsuke Hamaguchi Starring: Masahiro Higashide, Erika Karata, Kôji Seto Asako is a 21-year-old woman, living in Osaka. She falls in love with Baku who has a free spirit. One day Baku suddenly disappears. Two years later, Asako now living in Tokyo, meets Ryohei, who looks like her ex-boyfriend.