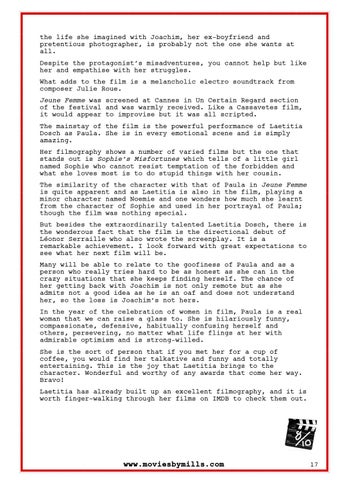 the life she imagined with Joachim, her ex-boyfriend and pretentious photographer, is probably not the one she wants at all. Despite the protagonist’s misadventures, you cannot help but like her and empathise with her struggles. What adds to the film is a melancholic electro soundtrack from composer Julie Roue. Jeune Femme was screened at Cannes in Un Certain Regard section of the festival and was warmly received. Like a Cassavetes film, it would appear to improvise but it was all scripted. The mainstay of the film is the powerful performance of Laetitia Dosch as Paula. She is in every emotional scene and is simply amazing. Her filmography shows a number of varied films but the one that stands out is Sophie’s Misfortunes which tells of a little girl named Sophie who cannot resist temptation of the forbidden and what she loves most is to do stupid things with her cousin. The similarity of the character with that of is quite apparent and as Laetitia is also in minor character named Noemie and one wonders from the character of Sophie and used in her though the film was nothing special.

Paula in Jeune Femme the film, playing a how much she learnt portrayal of Paula;

But besides the extraordinarily talented Laetitia Dosch, there is the wonderous fact that the film is the directional debut of Léonor Serraille who also wrote the screenplay. It is a remarkable achievement. I look forward with great expectations to see what her next film will be. Many will be able to relate to the goofiness of Paula and as a person who really tries hard to be as honest as she can in the crazy situations that she keeps finding herself. The chance of her getting back with Joachim is not only remote but as she admits not a good idea as he is an oaf and does not understand her, so the loss is Joachim’s not hers. In the year of the celebration of women in film, Paula woman that we can raise a glass to. She is hilariously compassionate, defensive, habitually confusing herself others, persevering, no matter what life flings at her admirable optimism and is strong-willed.

is a real funny, and with

She is the sort of person that if you met her for a cup of coffee, you would find her talkative and funny and totally entertaining. This is the joy that Laetitia brings to the character. Wonderful and worthy of any awards that come her way. Bravo! Laetitia has already built up an excellent filmography, and it is worth finger-walking through her films on IMDB to check them out.