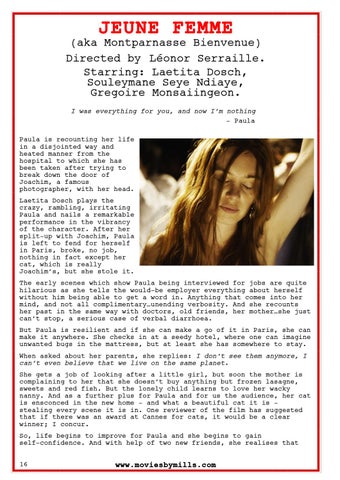 JEUNE FEMME (aka Montparnasse Bienvenue) Directed by Léonor Serraille. Starring: Laetita Dosch, Souleymane Seye Ndiaye, Gregoire Monsaiingeon. I was everything for you, and now I’m nothing - Paula

Paula is recounting her life in a disjointed way and heated manner from the hospital to which she has been taken after trying to break down the door of Joachim, a famous photographer, with her head. Laetita Dosch plays the crazy, rambling, irritating Paula and nails a remarkable performance in the vibrancy of the character. After her split-up with Joachim, Paula is left to fend for herself in Paris, broke, no job, nothing in fact except her cat, which is really Joachim’s, but she stole it. The early scenes which show Paula being interviewed for jobs are quite hilarious as she tells the would-be employer everything about herself without him being able to get a word in. Anything that comes into her mind, and not all complimentary…unending verbosity. And she recounts her past in the same way with doctors, old friends, her mother…she just can’t stop, a serious case of verbal diarrhoea. But Paula is resilient and if she can make a go of it in Paris, she can make it anywhere. She checks in at a seedy hotel, where one can imagine unwanted bugs in the mattress, but at least she has somewhere to stay. When asked about her parents, she replies: I don’t see them anymore, I can’t even believe that we live on the same planet. She gets a job of looking after a little girl, but soon the mother is complaining to her that she doesn’t buy anything but frozen lasagne, sweets and red fish. But the lonely child learns to love her wacky nanny. And as a further plus for Paula and for us the audience, her cat is ensconced in the new home – and what a beautiful cat it is – stealing every scene it is in. One reviewer of the film has suggested that if there was an award at Cannes for cats, it would be a clear winner; I concur. So, life begins to improve for Paula and she begins to gain self-confidence. And with help of two new friends, she realises that 16