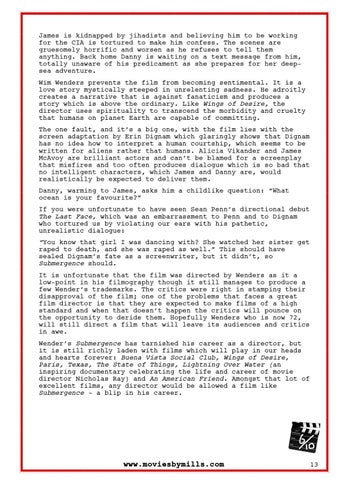 James is kidnapped by jihadists and believing him to be working for the CIA is tortured to make him confess. The scenes are gruesomely horrific and worsen as he refuses to tell them anything. Back home Danny is waiting on a text message from him, totally unaware of his predicament as she prepares for her deepsea adventure. Wim Wenders prevents the film from becoming sentimental. It is a love story mystically steeped in unrelenting sadness. He adroitly creates a narrative that is against fanaticism and produces a story which is above the ordinary. Like Wings of Desire, the director uses spirituality to transcend the morbidity and cruelty that humans on planet Earth are capable of committing. The one fault, and it’s a big one, with the film lies with the screen adaptation by Erin Dignam which glaringly shows that Dignam has no idea how to interpret a human courtship, which seems to be written for aliens rather that humans. Alicia Vikander and James McAvoy are brilliant actors and can’t be blamed for a screenplay that misfires and too often produces dialogue which is so bad that no intelligent characters, which James and Danny are, would realistically be expected to deliver them. Danny, warming to James, asks him a childlike question: “What ocean is your favourite?” If you were unfortunate to have seen Sean Penn’s directional debut The Last Face, which was an embarrassment to Penn and to Dignam who tortured us by violating our ears with his pathetic, unrealistic dialogue:

“You know that girl I was dancing with? She watched her sister get raped to death, and she was raped as well.” This should have sealed Dignam’s fate as a screenwriter, but it didn’t, so Submergence should. It is unfortunate that the film was directed by Wenders as it a low-point in his filmography though it still manages to produce a few Wender’s trademarks. The critics were right in stamping their disapproval of the film; one of the problems that faces a great film director is that they are expected to make films of a high standard and when that doesn’t happen the critics will pounce on the opportunity to deride them. Hopefully Wenders who is now 72, will still direct a film that will leave its audiences and critics in awe. Wender’s Submergence has tarnished his career as a director, but it is still richly laden with films which will play in our heads and hearts forever: Buena Vista Social Club, Wings of Desire, Paris, Texas, The State of Things, Lightning Over Water (an inspiring documentary celebrating the life and career of movie director Nicholas Ray) and An American Friend. Amongst that lot of excellent films, any director would be allowed a film like Submergence – a blip in his career.