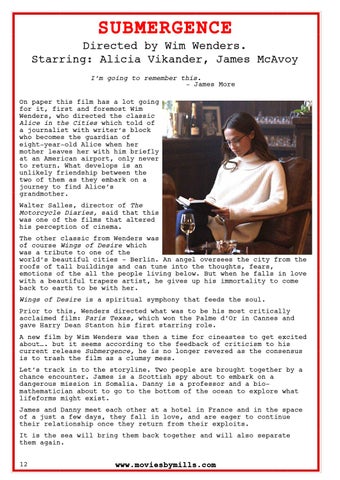 SUBMERGENCE Directed by Wim Wenders. Starring: Alicia Vikander, James McAvoy I’m going to remember this. - James More On paper this film has a lot going for it, first and foremost Wim Wenders, who directed the classic Alice in the Cities which told of a journalist with writer’s block who becomes the guardian of eight-year-old Alice when her mother leaves her with him briefly at an American airport, only never to return. What develops is an unlikely friendship between the two of them as they embark on a journey to find Alice’s grandmother. Walter Salles, director of The Motorcycle Diaries, said that this was one of the films that altered his perception of cinema.

The other classic from Wenders was of course Wings of Desire which was a tribute to one of the world’s beautiful cities – Berlin. An angel oversees the city from the roofs of tall buildings and can tune into the thoughts, fears, emotions of the all the people living below. But when he falls in love with a beautiful trapeze artist, he gives up his immortality to come back to earth to be with her. Wings of Desire is a spiritual symphony that feeds the soul. Prior to this, Wenders directed what was to be his most critically acclaimed film: Paris Texas, which won the Palme d’Or in Cannes and gave Harry Dean Stanton his first starring role.

A new film by Wim Wenders was then a time for cineastes to get excited about…. but it seems according to the feedback of criticism to his current release Submergence, he is no longer revered as the consensus is to trash the film as a clumsy mess. Let’s track in to the storyline. Two people are brought together by a chance encounter. James is a Scottish spy about to embark on a dangerous mission in Somalia. Danny is a professor and a biomathematician about to go to the bottom of the ocean to explore what lifeforms might exist. James and Danny meet each other at a hotel in France and in the space of a just a few days, they fall in love, and are eager to continue their relationship once they return from their exploits. It is the sea will bring them back together and will also separate them again. 12