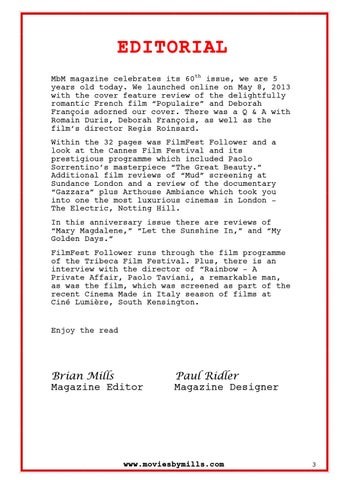 EDITORIAL MbM magazine celebrates its 60th issue, we are 5 years old today. We launched online on May 8, 2013 with the cover feature review of the delightfully romantic French film “Populaire” and Deborah François adorned our cover. There was a Q & A with Romain Duris, Deborah François, as well as the film’s director Regis Roinsard.

Within the 32 pages was FilmFest Follower and a look at the Cannes Film Festival and its prestigious programme which included Paolo Sorrentino’s masterpiece “The Great Beauty.” Additional film reviews of “Mud” screening at Sundance London and a review of the documentary “Gazzara” plus Arthouse Ambiance which took you into one the most luxurious cinemas in London – The Electric, Notting Hill. In this anniversary issue there are reviews of “Mary Magdalene,” “Let the Sunshine In,” and “My Golden Days.” FilmFest Follower runs through the film programme of the Tribeca Film Festival. Plus, there is an interview with the director of “Rainbow – A Private Affair, Paolo Taviani, a remarkable man, as was the film, which was screened as part of the recent Cinema Made in Italy season of films at Ciné Lumière, South Kensington.