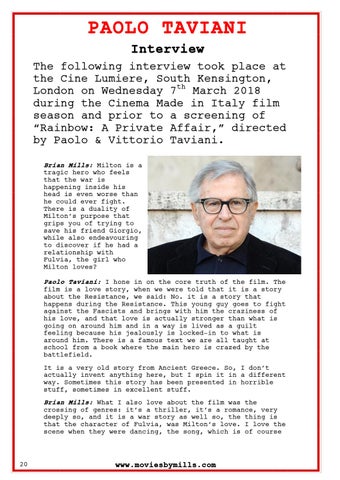 PAOLO TAVIANI Interview The following interview took place at the Cine Lumiere, South Kensington, London on Wednesday 7th March 2018 during the Cinema Made in Italy film season and prior to a screening of “Rainbow: A Private Affair,” directed by Paolo & Vittorio Taviani. Brian Mills: Milton is a tragic hero who feels that the war is happening inside his head is even worse than he could ever fight. There is a duality of Milton’s purpose that grips you of trying to save his friend Giorgio, while also endeavouring to discover if he had a relationship with Fulvia, the girl who Milton loves?

Paolo Taviani: I hone in on the core truth of the film. The film is a love story, when we were told that it is a story about the Resistance, we said: No. it is a story that happens during the Resistance. This young guy goes to fight against the Fascists and brings with him the craziness of his love, and that love is actually stronger than what is going on around him and in a way is lived as a guilt feeling because his jealously is locked-in to what is around him. There is a famous text we are all taught at school from a book where the main hero is crazed by the battlefield. It is a very old story from Ancient Greece. So, I don’t actually invent anything here, but I spin it in a different way. Sometimes this story has been presented in horrible stuff, sometimes in excellent stuff.

Brian Mills: What I also love about the film was the crossing of genres: it’s a thriller, it’s a romance, very deeply so, and it is a war story as well so, the thing is that the character of Fulvia, was Milton’s love. I love the scene when they were dancing, the song, which is of course