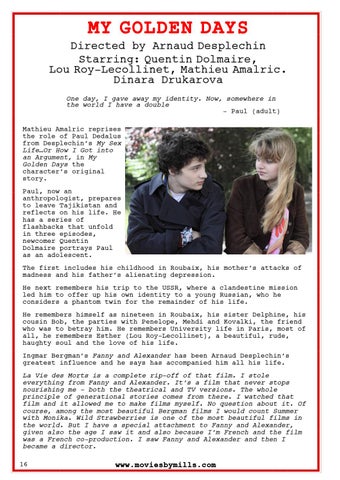 MY GOLDEN DAYS Directed by Arnaud Desplechin Starring: Quentin Dolmaire, Lou Roy-Lecollinet, Mathieu Amalric. Dinara Drukarova One day, I gave away my identity. Now, somewhere in the world I have a double - Paul (adult) Mathieu Amalric reprises the role of Paul Dedalus from Desplechin’s My Sex Life…Or How I Got into an Argument, in My Golden Days the character’s original story. Paul, now an anthropologist, prepares to leave Tajikistan and reflects on his life. He has a series of flashbacks that unfold in three episodes, newcomer Quentin Dolmaire portrays Paul as an adolescent. The first includes his childhood in Roubaix, his mother’s attacks of madness and his father’s alienating depression. He next remembers his trip to the USSR, where a clandestine mission led him to offer up his own identity to a young Russian, who he considers a phantom twin for the remainder of his life. He remembers himself as nineteen in Roubaix, his sister Delphine, his cousin Bob, the parties with Penelope, Mehdi and Kovalki, the friend who was to betray him. He remembers University life in Paris, most of all, he remembers Esther (Lou Roy-Lecollinet), a beautiful, rude, haughty soul and the love of his life. Ingmar Bergman’s Fanny and Alexander has been Arnaud Desplechin’s greatest influence and he says has accompanied him all his life. La Vie des Morts is a complete rip-off of that film. I stole everything from Fanny and Alexander. It’s a film that never stops nourishing me – both the theatrical and TV versions. The whole principle of generational stories comes from there. I watched that film and it allowed me to make films myself. No question about it. Of course, among the most beautiful Bergman films I would count Summer with Monika. Wild Strawberries is one of the most beautiful films in the world. But I have a special attachment to Fanny and Alexander, given also the age I saw it and also because I’m French and the film was a French co-production. I saw Fanny and Alexander and then I became a director. 16