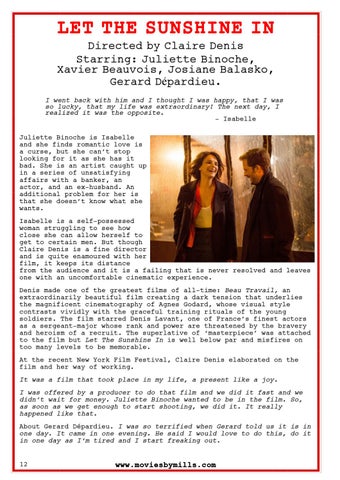 LET THE SUNSHINE IN Directed by Claire Denis Starring: Juliette Binoche, Xavier Beauvois, Josiane Balasko, Gerard Dépardieu. I went back with him and I thought I was happy, that I was so lucky, that my life was extraordinary! The next day, I realized it was the opposite. - Isabelle

Juliette Binoche is Isabelle and she finds romantic love is a curse, but she can’t stop looking for it as she has it bad. She is an artist caught up in a series of unsatisfying affairs with a banker, an actor, and an ex-husband. An additional problem for her is that she doesn’t know what she wants. Isabelle is a self-possessed woman struggling to see how close she can allow herself to get to certain men. But though Claire Denis is a fine director and is quite enamoured with her film, it keeps its distance from the audience and it is a failing that is never resolved and leaves one with an uncomfortable cinematic experience. Denis made one of the greatest films of all-time: Beau Travail, an extraordinarily beautiful film creating a dark tension that underlies the magnificent cinematography of Agnes Godard, whose visual style contrasts vividly with the graceful training rituals of the young soldiers. The film starred Denis Lavant, one of France’s finest actors as a sergeant-major whose rank and power are threatened by the bravery and heroism of a recruit. The superlative of ‘masterpiece’ was attached to the film but Let The Sunshine In is well below par and misfires on too many levels to be memorable. At the recent New York Film Festival, Claire Denis elaborated on the film and her way of working. It was a film that took place in my life, a present like a joy. I was offered by a producer to do that film and we did it fast and we didn’t wait for money. Juliette Binoche wanted to be in the film. So, as soon as we get enough to start shooting, we did it. It really happened like that. About Gerard Dépardieu. I was so terrified when Gerard told us it is in one day. It came in one evening. He said I would love to do this, do it in one day as I’m tired and I start freaking out.