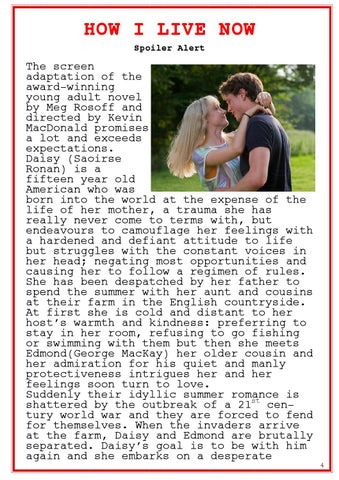 HOW I LIVE NOW Spoiler Alert

The screen adaptation of the award-winning young adult novel by Meg Rosoff and directed by Kevin MacDonald promises a lot and exceeds expectations. Daisy (Saoirse Ronan) is a fifteen year old American who was born into the world at the expense of the life of her mother, a trauma she has really never come to terms with, but endeavours to camouflage her feelings with a hardened and defiant attitude to life but struggles with the constant voices in her head; negating most opportunities and causing her to follow a regimen of rules. She has been despatched by her father to spend the summer with her aunt and cousins at their farm in the English countryside. At first she is cold and distant to her hostâ&amp;#x20AC;&amp;#x2122;s warmth and kindness: preferring to stay in her room, refusing to go fishing or swimming with them but then she meets Edmond(George MacKay) her older cousin and her admiration for his quiet and manly protectiveness intrigues her and her feelings soon turn to love. Suddenly their idyllic summer romance is st shattered by the outbreak of a 21 century world war and they are forced to fend for themselves. When the invaders arrive at the farm, Daisy and Edmond are brutally separated. Daisyâ&amp;#x20AC;&amp;#x2122;s goal is to be with him again and she embarks on a desperate 4