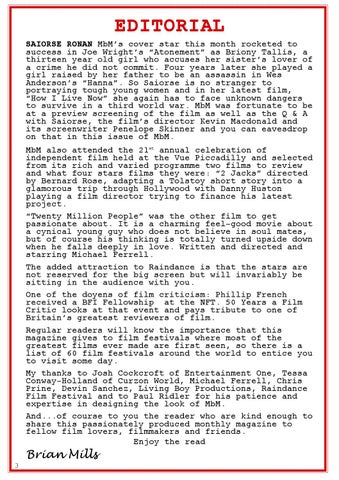 EDITORIAL SAIORSE RONAN MbM’s cover star this month rocketed to success in Joe Wright’s “Atonement” as Briony Tallis, a thirteen year old girl who accuses her sister’s lover of a crime he did not commit. Four years later she played a girl raised by her father to be an assassin in Wes Anderson’s “Hanna”. So Saiorse is no stranger to portraying tough young women and in her latest film, “How I Live Now” she again has to face unknown dangers to survive in a third world war. MbM was fortunate to be at a preview screening of the film as well as the Q &amp; A with Saiorse, the film’s director Kevin Macdonald and its screenwriter Penelope Skinner and you can eavesdrop on that in this issue of MbM. MbM also attended the 21st annual celebration of independent film held at the Vue Piccadilly and selected from its rich and varied programme two films to review and what four stars films they were: “2 Jacks” directed by Bernard Rose, adapting a Tolstoy short story into a glamorous trip through Hollywood with Danny Huston playing a film director trying to finance his latest project. “Twenty Million People” was the other film to get passionate about. It is a charming feel-good movie about a cynical young guy who does not believe in soul mates, but of course his thinking is totally turned upside down when he falls deeply in love. Written and directed and starring Michael Ferrell. The added attraction to Raindance is that the stars are not reserved for the big screen but will invariably be sitting in the audience with you. One of the doyens of film criticism: Phillip French received a BFI Fellowship at the NFT. 50 Years a Film Critic looks at that event and pays tribute to one of Britain’s greatest reviewers of film. Regular readers will know the importance that this magazine gives to film festivals where most of the greatest films ever made are first seen, so there is a list of 60 film festivals around the world to entice you to visit some day. My thanks to Josh Cockcroft of Entertainment One, Tessa Conway-Holland of Curzon World, Michael Ferrell, Chris Prine, Devin Sanchez, Living Boy Productions, Raindance Film Festival and to Paul Ridler for his patience and expertise in designing the look of MbM. And...of course to you the reader who are kind enough to share this passionately produced monthly magazine to fellow film lovers, filmmakers and friends. Enjoy the read