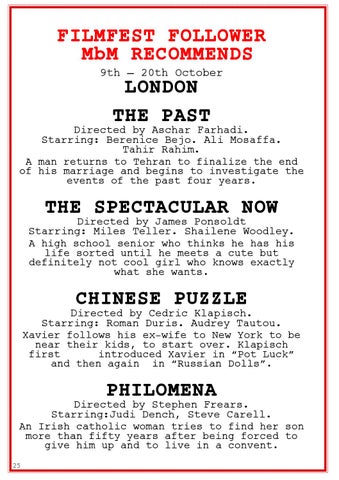 Directed by Aschar Farhadi. Starring: Berenice Bejo. Ali Mosaffa. Tahir Rahim. A man returns to Tehran to finalize the end of his marriage and begins to investigate the events of the past four years.

THE SPECTACULAR NOW Directed by James Ponsoldt Starring: Miles Teller. Shailene Woodley. A high school senior who thinks he has his life sorted until he meets a cute but definitely not cool girl who knows exactly what she wants.

Directed by Cedric Klapisch. Starring: Roman Duris. Audrey Tautou. Xavier follows his ex-wife to New York to be near their kids, to start over. Klapisch first introduced Xavier in “Pot Luck” and then again in “Russian Dolls”.

Directed by Stephen Frears. Starring:Judi Dench, Steve Carell. An Irish catholic woman tries to find her son more than fifty years after being forced to give him up and to live in a convent. 25