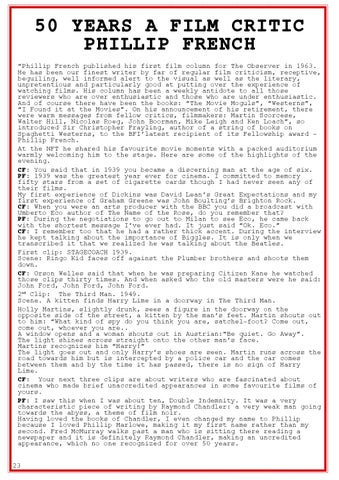 50 YEARS A FILM CRITIC PHILLIP FRENCH “Phillip French published his first film column for The Observer in 1963. He has been our finest writer by far of regular film criticism, receptive, beguiling, well informed alert to the visual as well as the literary, unpretentious and particularly good at putting over the experience of watching films. His column has been a weekly antidote to all those reviewers who are over enthusiastic and those who are under enthusiastic. And of course there have been the books: “The Movie Moguls”, “Westerns”, “I Found it at the Movies”. On his announcement of his retirement, there were warm messages from fellow critics, filmmakers: Martin Scorcese, Walter Hill, Nicolas Roeg, John Boorman, Mike Leigh and Ken Loach”, so introduced Sir Christopher Frayling, author of a string of books on Spaghetti Westerns, to the BFI’latest recipient of its Fellowship award – Phillip French. At the NFT he shared his favourite movie moments with a packed auditorium warmly welcoming him to the stage. Here are some of the highlights of the evening. CF: You said that in 1939 you became a discerning man at the age of six. PF: 1939 was the greatest year ever for cinema. I committed to memory fifty stars from a set of cigarette cards though I had never seen any of their films. My first experience of Dickins was David Lean’s Great Expectations and my first experience of Graham Greene was John Boulting’s Brighton Rock. CF: When you were an arts producer with the BBC you did a broadcast with Umberto Eco author of The Name of the Rose, do you remember that? PF: During the negotiations to go out to Milan to see Eco, he came back with the shortest message I’ve ever had. It just said “Ok. Eco.” CF: I remember too that he had a rather thick accent. During the interview he kept talking about the importance of Biggles. It is only when we transcribed it that we realized he was talking about the Beatles. First clip: STAGECOACH 1939. Scene: Ringo Kid faces off against the Plumber brothers and shoots them down. CF: Orson Welles said that when he was preparing Citizen Kane he watched those clips thirty times. And when asked who the old masters were he said: John Ford, John Ford, John Ford. 2nd Clip: The Third Man. 1949. Scene. A kitten finds Harry Lime in a doorway in The Third Man. Holly Martins, slightly drunk, sees a figure in the doorway on the opposite side of the street, a kitten by the man’s feet. Martin shouts out to him: “What kind of spy do you think you are, satchel-foot? Come out, come out, whoever you are.. A window opens and a woman shouts out in Austrian:”Be quiet. Go Away”. The light shines across straight onto the other man’s face. Martins recognizes him “Harry!” The light goes out and only Harry’s shoes are seen. Martin runs across the road towards him but is intercepted by a police car and the car comes between them and by the time it has passed, there is no sign of Harry Lime. CF: Your next three clips are about writers who are fascinated about cinema who made brief unaccredited appearances in some favourite films of yours. PF: I saw this when I was about ten, Double Indemnity. It was a very characteristic piece of writing by Raymond Chandler: a very weak man going towards the abyss, a theme of film noir. Having loved the books of Chandler, I even changed my name to Phillip because I loved Phillip Marlowe, making it my first name rather than my second. Fred McMurray walks past a man who is sitting there reading a newspaper and it is definitely Raymond Chandler, making an uncredited appearance, which no one recognized for over 50 years. 23