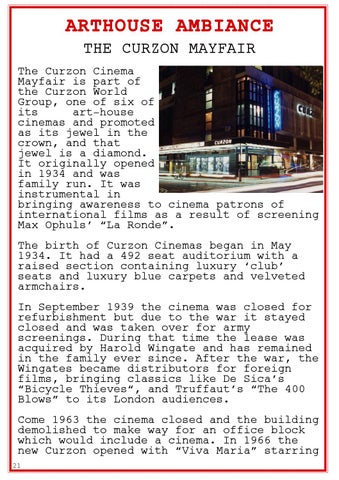 ARTHOUSE AMBIANCE THE CURZON MAYFAIR The Curzon Cinema Mayfair is part of the Curzon World Group, one of six of its art-house cinemas and promoted as its jewel in the crown, and that jewel is a diamond. It originally opened in 1934 and was family run. It was instrumental in bringing awareness to cinema patrons of international films as a result of screening Max Ophuls’ “La Ronde”. The birth of Curzon Cinemas began in May 1934. It had a 492 seat auditorium with a raised section containing luxury ‘club’ seats and luxury blue carpets and velveted armchairs. In September 1939 the cinema was closed for refurbishment but due to the war it stayed closed and was taken over for army screenings. During that time the lease was acquired by Harold Wingate and has remained in the family ever since. After the war, the Wingates became distributors for foreign films, bringing classics like De Sica’s “Bicycle Thieves“, and Truffaut’s “The 400 Blows” to its London audiences. Come 1963 the cinema closed and the building demolished to make way for an office block which would include a cinema. In 1966 the new Curzon opened with “Viva Maria” starring 21