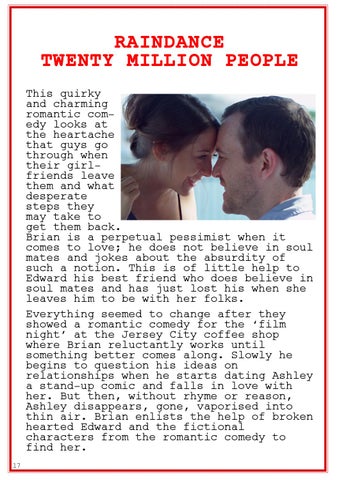 RAINDANCE TWENTY MILLION PEOPLE This quirky and charming romantic comedy looks at the heartache that guys go through when their girlfriends leave them and what desperate steps they may take to get them back. Brian is a perpetual pessimist when it comes to love; he does not believe in soul mates and jokes about the absurdity of such a notion. This is of little help to Edward his best friend who does believe in soul mates and has just lost his when she leaves him to be with her folks. Everything seemed to change after they showed a romantic comedy for the â&amp;#x20AC;&amp;#x2DC;film nightâ&amp;#x20AC;&amp;#x2122; at the Jersey City coffee shop where Brian reluctantly works until something better comes along. Slowly he begins to question his ideas on relationships when he starts dating Ashley a stand-up comic and falls in love with her. But then, without rhyme or reason, Ashley disappears, gone, vaporised into thin air. Brian enlists the help of broken hearted Edward and the fictional characters from the romantic comedy to find her. 17