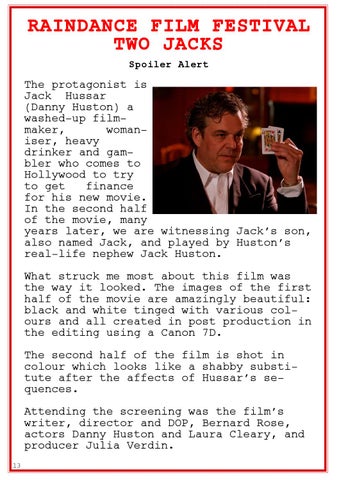 The protagonist is Jack Hussar (Danny Huston) a washed-up filmmaker, womaniser, heavy drinker and gambler who comes to Hollywood to try to get finance for his new movie. In the second half of the movie, many years later, we are witnessing Jack’s son, also named Jack, and played by Huston’s real-life nephew Jack Huston. What struck me most about this film was the way it looked. The images of the first half of the movie are amazingly beautiful: black and white tinged with various colours and all created in post production in the editing using a Canon 7D. The second half of the film is shot in colour which looks like a shabby substitute after the affects of Hussar’s sequences. Attending the screening was the film’s writer, director and DOP, Bernard Rose, actors Danny Huston and Laura Cleary, and producer Julia Verdin. 13