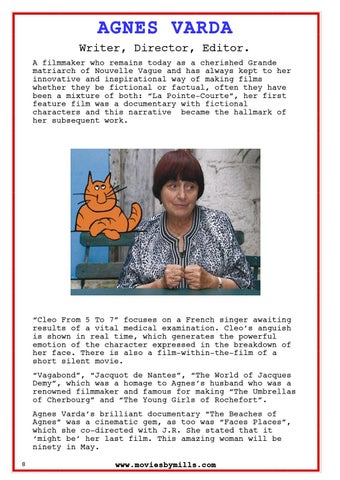 AGNES VARDA Writer, Director, Editor. A filmmaker who remains today as a cherished Grande matriarch of Nouvelle Vague and has always kept to her innovative and inspirational way of making films whether they be fictional or factual, often they have been a mixture of both: “La Pointe-Courte”, her first feature film was a documentary with fictional characters and this narrative became the hallmark of her subsequent work.

“Cleo From 5 To 7” focuses on a French singer awaiting results of a vital medical examination. Cleo’s anguish is shown in real time, which generates the powerful emotion of the character expressed in the breakdown of her face. There is also a film-within-the-film of a short silent movie. “Vagabond”, “Jacquot de Nantes”, “The World of Jacques Demy”, which was a homage to Agnes’s husband who was a renowned filmmaker and famous for making “The Umbrellas of Cherbourg” and “The Young Girls of Rochefort”. Agnes Varda’s brilliant documentary “The Beaches of Agnes” was a cinematic gem, as too was “Faces Places”, which she co-directed with J.R. She stated that it ‘might be’ her last film. This amazing woman will be ninety in May. 8