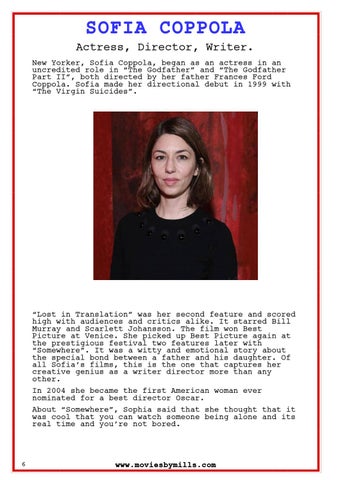 SOFIA COPPOLA Actress, Director, Writer. New Yorker, Sofia Coppola, began as an actress in an uncredited role in “The Godfather” and “The Godfather Part II”, both directed by her father Frances Ford Coppola. Sofia made her directional debut in 1999 with “The Virgin Suicides”.

“Lost in Translation” was her second feature and scored high with audiences and critics alike. It starred Bill Murray and Scarlett Johansson. The film won Best Picture at Venice. She picked up Best Picture again at the prestigious festival two features later with “Somewhere”. It was a witty and emotional story about the special bond between a father and his daughter. Of all Sofia’s films, this is the one that captures her creative genius as a writer director more than any other. In 2004 she became the first American woman ever nominated for a best director Oscar. About “Somewhere”, Sophia said that she thought that it was cool that you can watch someone being alone and its real time and you’re not bored.