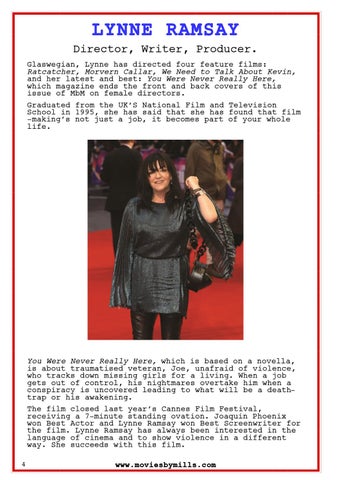 LYNNE RAMSAY Director, Writer, Producer. Glaswegian, Lynne has directed four feature films: Ratcatcher, Morvern Callar, We Need to Talk About Kevin, and her latest and best: You Were Never Really Here, which magazine ends the front and back covers of this issue of MbM on female directors. Graduated from the UK’S National Film and Television School in 1995, she has said that she has found that film -making’s not just a job, it becomes part of your whole life.

You Were Never Really Here, which is based on a novella, is about traumatised veteran, Joe, unafraid of violence, who tracks down missing girls for a living. When a job gets out of control, his nightmares overtake him when a conspiracy is uncovered leading to what will be a deathtrap or his awakening. The film closed last year’s Cannes Film Festival, receiving a 7-minute standing ovation. Joaquin Phoenix won Best Actor and Lynne Ramsay won Best Screenwriter for the film. Lynne Ramsay has always been interested in the language of cinema and to show violence in a different way. She succeeds with this film. 4