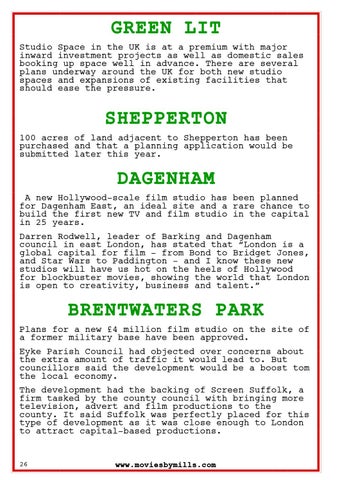 GREEN LIT Studio Space in the UK is at a premium with major inward investment projects as well as domestic sales booking up space well in advance. There are several plans underway around the UK for both new studio spaces and expansions of existing facilities that should ease the pressure.

SHEPPERTON 100 acres of land adjacent to Shepperton has been purchased and that a planning application would be submitted later this year.

DAGENHAM A new Hollywood-scale film studio has been planned for Dagenham East, an ideal site and a rare chance to build the first new TV and film studio in the capital in 25 years. Darren Rodwell, leader of Barking and Dagenham council in east London, has stated that “London is a global capital for film – from Bond to Bridget Jones, and Star Wars to Paddington – and I know these new studios will have us hot on the heels of Hollywood for blockbuster movies, showing the world that London is open to creativity, business and talent.”

BRENTWATERS PARK Plans for a new £4 million film studio on the site of a former military base have been approved. Eyke Parish Council had objected over concerns about the extra amount of traffic it would lead to. But councillors said the development would be a boost tom the local economy. The development had the backing of Screen Suffolk, a firm tasked by the county council with bringing more television, advert and film productions to the county. It said Suffolk was perfectly placed for this type of development as it was close enough to London to attract capital-based productions.