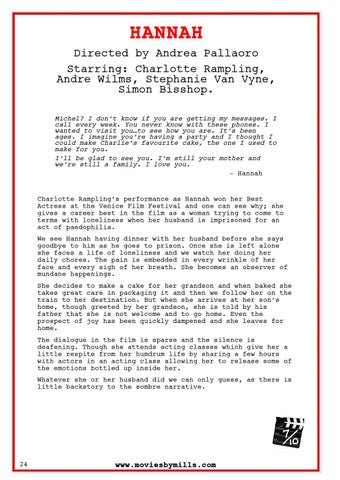 HANNAH Directed by Andrea Pallaoro Starring: Charlotte Rampling, Andre Wilms, Stephanie Van Vyne, Simon Bisshop. Michel? I don’t know if you are getting my messages. I call every week. You never know with these phones. I wanted to visit you…to see how you are. It’s been ages. I imagine you’re having a party and I thought I could make Charlie’s favourite cake, the one I used to make for you. I’ll be glad to see you. I’m still your mother and we’re still a family. I love you. - Hannah

Charlotte Rampling’s performance as Hannah won her Best Actress at the Venice Film Festival and one can see why; she gives a career best in the film as a woman trying to come to terms with loneliness when her husband is imprisoned for an act of paedophilia.

We see Hannah having dinner with her husband before she says goodbye to him as he goes to prison. Once she is left alone she faces a life of loneliness and we watch her doing her daily chores. The pain is embedded in every wrinkle of her face and every sigh of her breath. She becomes an observer of mundane happenings. She decides to make a cake for her grandson and when baked she takes great care in packaging it and then we follow her on the train to her destination. But when she arrives at her son’s home, though greeted by her grandson, she is told by his father that she is not welcome and to go home. Even the prospect of joy has been quickly dampened and she leaves for home.

The dialogue in the film is sparse and the silence is deafening. Though she attends acting classes which give her a little respite from her humdrum life by sharing a few hours with actors in an acting class allowing her to release some of the emotions bottled up inside her. Whatever she or her husband did we can only guess, as there is little backstory to the sombre narrative.