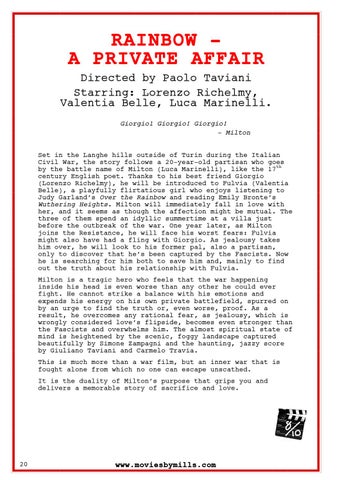 RAINBOW – A PRIVATE AFFAIR Directed by Paolo Taviani Starring: Lorenzo Richelmy, Valentia Belle, Luca Marinelli. Giorgio1 Giorgio! Giorgio! - Milton Set in the Langhe hills outside of Turin during the Italian Civil War, the story follows a 20-year-old partisan who goes by the battle name of Milton (Luca Marinelli), like the 17th century English poet. Thanks to his best friend Giorgio (Lorenzo Richelmy), he will be introduced to Fulvia (Valentia Belle), a playfully flirtatious girl who enjoys listening to Judy Garland’s Over the Rainbow and reading Emily Bronte’s Wuthering Heights. Milton will immediately fall in love with her, and it seems as though the affection might be mutual. The three of them spend an idyllic summertime at a villa just before the outbreak of the war. One year later, as Milton joins the Resistance, he will face his worst fears: Fulvia might also have had a fling with Giorgio. As jealousy takes him over, he will look to his former pal, also a partisan, only to discover that he’s been captured by the Fascists. Now he is searching for him both to save him and, mainly to find out the truth about his relationship with Fulvia. Milton is a tragic hero who feels that the war happening inside his head is even worse than any other he could ever fight. He cannot strike a balance with his emotions and expends his energy on his own private battlefield, spurred on by an urge to find the truth or, even worse, proof. As a result, he overcomes any rational fear, as jealousy, which is wrongly considered love’s flipside, becomes even stronger than the Fascists and overwhelms him. The almost spiritual state of mind is heightened by the scenic, foggy landscape captured beautifully by Simone Zampagni and the haunting, jazzy score by Giuliano Taviani and Carmelo Travia. This is much more than a war film, but an inner war that is fought alone from which no one can escape unscathed. It is the duality of Milton’s purpose that grips you and delivers a memorable story of sacrifice and love.