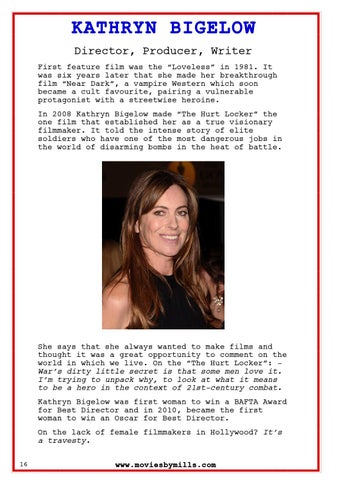 KATHRYN BIGELOW Director, Producer, Writer First feature film was the “Loveless” in 1981. It was six years later that she made her breakthrough film “Near Dark”, a vampire Western which soon became a cult favourite, pairing a vulnerable protagonist with a streetwise heroine. In 2008 Kathryn Bigelow made “The Hurt Locker” the one film that established her as a true visionary filmmaker. It told the intense story of elite soldiers who have one of the most dangerous jobs in the world of disarming bombs in the heat of battle.

She says that she always wanted to make films and thought it was a great opportunity to comment on the world in which we live. On the “The Hurt Locker”: War’s dirty little secret is that some men love it. I’m trying to unpack why, to look at what it means to be a hero in the context of 21st-century combat. Kathryn Bigelow was first woman to win a BAFTA Award for Best Director and in 2010, became the first woman to win an Oscar for Best Director. On the lack of female filmmakers in Hollywood? It’s a travesty. 16