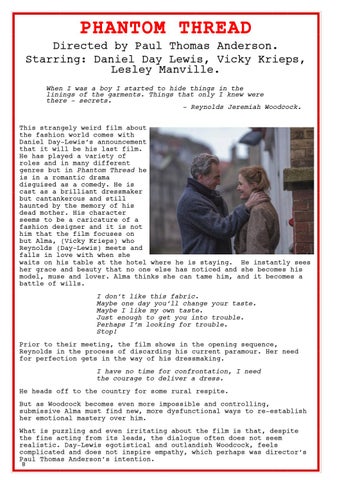 PHANTOM THREAD Directed by Paul Thomas Anderson. Starring: Daniel Day Lewis, Vicky Krieps, Lesley Manville. When I was a boy I started to hide things in the linings of the garments. Things that only I knew were there – secrets. - Reynolds Jeremiah Woodcock. This strangely weird film about the fashion world comes with Daniel Day-Lewis’s announcement that it will be his last film. He has played a variety of roles and in many different genres but in Phantom Thread he is in a romantic drama disguised as a comedy. He is cast as a brilliant dressmaker but cantankerous and still haunted by the memory of his dead mother. His character seems to be a caricature of a fashion designer and it is not him that the film focuses on but Alma, (Vicky Krieps) who Reynolds (Day-Lewis) meets and falls in love with when she waits on his table at the hotel where he is staying. He instantly sees her grace and beauty that no one else has noticed and she becomes his model, muse and lover. Alma thinks she can tame him, and it becomes a battle of wills. I don’t like this fabric. Maybe one day you’ll change your taste. Maybe I like my own taste. Just enough to get you into trouble. Perhaps I’m looking for trouble. Stop! Prior to their meeting, the film shows in the opening sequence, Reynolds in the process of discarding his current paramour. Her need for perfection gets in the way of his dressmaking. I have no time for confrontation, I need the courage to deliver a dress. He heads off to the country for some rural respite. But as Woodcock becomes even more impossible and controlling, submissive Alma must find new, more dysfunctional ways to re-establish her emotional mastery over him. What is puzzling and even irritating about the film is that, despite the fine acting from its leads, the dialogue often does not seem realistic. Day-Lewis egotistical and outlandish Woodcock, feels complicated and does not inspire empathy, which perhaps was director’s Paul Thomas Anderson’s intention. 8