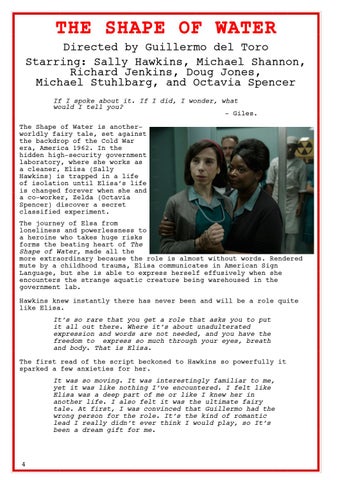 THE SHAPE OF WATER Directed by Guillermo del Toro Starring: Sally Hawkins, Michael Shannon, Richard Jenkins, Doug Jones, Michael Stuhlbarg, and Octavia Spencer If I spoke about it. If I did, I wonder, what would I tell you? - Giles. The Shape of Water is anotherworldly fairy tale, set against the backdrop of the Cold War era, America 1962. In the hidden high-security government laboratory, where she works as a cleaner, Elisa (Sally Hawkins) is trapped in a life of isolation until Elisa’s life is changed forever when she and a co-worker, Zelda (Octavia Spencer) discover a secret classified experiment. The journey of Elsa from loneliness and powerlessness to a heroine who takes huge risks forms the beating heart of The Shape of Water, made all the more extraordinary because the role is almost without words. Rendered mute by a childhood trauma, Elisa communicates in American Sign Language, but she is able to express herself effusively when she encounters the strange aquatic creature being warehoused in the government lab. Hawkins knew instantly there has never been and will be a role quite like Elisa. It’s so rare that you get a role that asks you to put it all out there. Where it’s about unadulterated expression and words are not needed, and you have the freedom to express so much through your eyes, breath and body. That is Elisa. The first read of the script beckoned to Hawkins so powerfully it sparked a few anxieties for her. It was so moving. It was interestingly familiar to me, yet it was like nothing I’ve encountered. I felt like Elisa was a deep part of me or like I knew her in another life. I also felt it was the ultimate fairy tale. At first, I was convinced that Guillermo had the wrong person for the role. It’s the kind of romantic lead I really didn’t ever think I would play, so It’s been a dream gift for me.