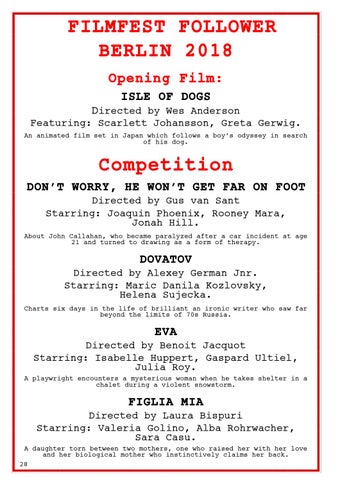 Competition DON’T WORRY, HE WON’T GET FAR ON FOOT Directed by Gus van Sant Starring: Joaquin Phoenix, Rooney Mara, Jonah Hill. About John Callahan, who became paralyzed after a car incident at age 21 and turned to drawing as a form of therapy.

EVA Directed by Benoit Jacquot Starring: Isabelle Huppert, Gaspard Ultiel, Julia Roy. A playwright encounters a mysterious woman when he takes shelter in a chalet during a violent snowstorm.

FIGLIA MIA Directed by Laura Bispuri Starring: Valeria Golino, Alba Rohrwacher, Sara Casu. A daughter torn between two mothers, one who raised her with her love and her biological mother who instinctively claims her back. 28